The BASA Newsletter, which first appeared in 1991, has been suspended, perhaps discontinued. It used to carry information on forthcoming events, research findings, articles on the many aspects of the history of peoples of African and Asian origin/descent in the UK, and book reviews. While we try to work out how we could continue its publication, articles/reviews will appear on this website, in the Newsletter section. If you would like to purchase back copies of the Newsletter, please contact BASA’s Secretary, Jonah Albert on admin@blackndasstuds.org

Contributions, January 2013: You can read the article by Dr Shihan de Silva Jayasuriya about Indias hidden African communities by clicking on this link

Newsletter 63 is now available for download by clicking here featuring articles about Medieval Travellers, The Chinese in Victorian Britain and a case study looking at the impact of the BBC and race issues as well as the regular book and conference reviews and historical figures and documents.

Newsletter 62 is now available for download by clicking here featuring articles about Una Marson by Imaobong Umoren , Carlos Trower, the African Blondin by Ron Howard and The Real Black Heathcliffs  and Heathers by Audrey Dewjee as well as the regular book reviews and historical figures.

The latest double edition of the BASA newsletter is the 60th Diamond anniversary edition featuring articles about the Brixton Uprising in 1981, Black British history in Australia, Runaways, Henry Sylvester Williams as well as all the regular book reviews, historical figures and much more. You can DOWNLOAD this edition by clicking here 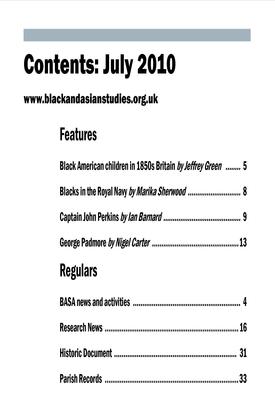 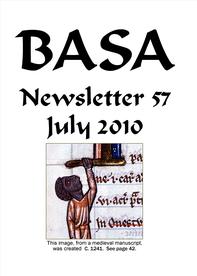 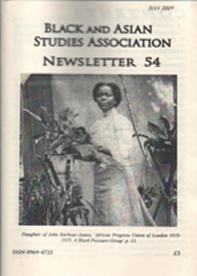 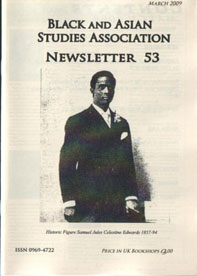 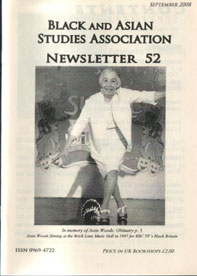 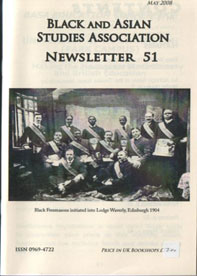 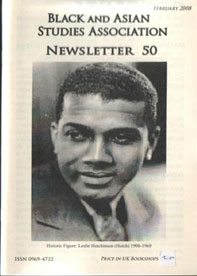 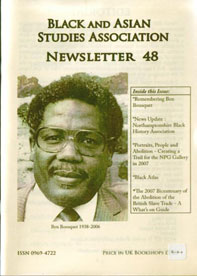 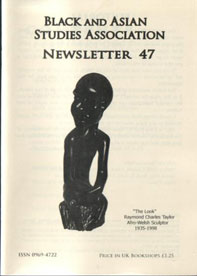 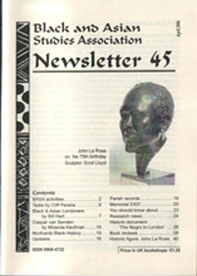 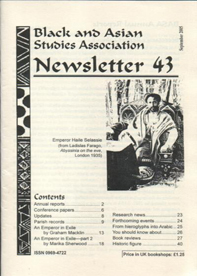 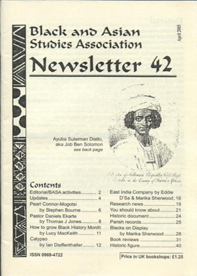 Newsletter 42 (April 2005). In memoriam: Pearl Connor-Mogotsi (1924-2005), by Stephen Bourne. A Reminiscence on Pastor Daniel Ekarte and the African Churches Mission, Part 3, by Thomas, J. Jones. How to grow Black History Month in your area, by Lucy MacKeith. Calypso in Britain down to 1962, by Ian Dieffenthaller. The ravages caused and the profits made by the East India Company, by Marika Sherwood and Eddie D’Sa. Negro Apprentices. From Proceedings of the Court of Aldermen City of London 14 September 1731 (Historic document). Blacks on display  and performers: a few clues, by Marika Sherwood. Ayuba Suleiman Diallo, aka Job Ben Solomon, by Marika Sherwood (Historic figure). Editorial. BASA Activities. Updates and Feedback. Research sources, news, suggestions, etc. You should know about. Parish and other records. Book Reviews. Journals and articles. 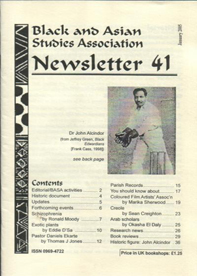 Newsletter 41 (January 2005). The British government and the Windrush (Memo 15 June 1948) (Historic document). Schizophrenia and Socialists  or a reading of recent events, by Ronald Moody (from c. 1955). Exotic plants and botanical gardens, by Eddie D’Sa. A Reminiscence on Pastor Daniel Ekarte and the African Churches Mission, Part 2, by Thomas, J. Jones. The Coloured Film Artists’ Association, by Marika Sherwood. ‘Creole’  what does it mean? by Sean Creighton. Arab scholars and hieroglyphs, by Okasha El Daly. Dr John Alcindor (1873-1924), by Marika Sherwood (Historic figure). Editorial, BASA Activities: Parish and other records. You should know about.’ Research News & Clues. Book Reviews. Journals 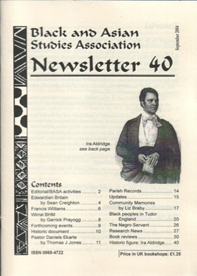 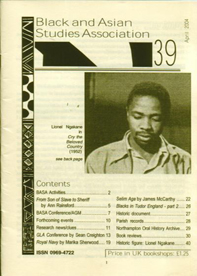 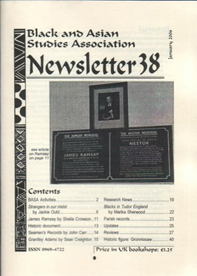 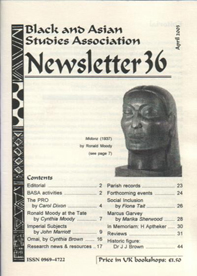 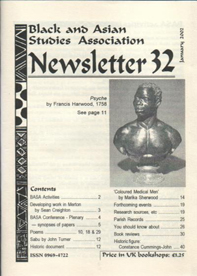 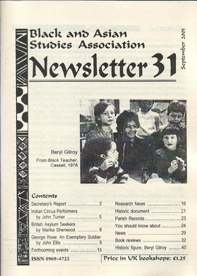 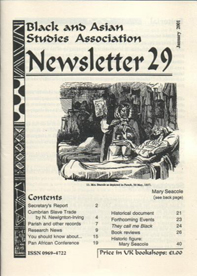 Newsletter 12 (April 1995). What are Black people born in this country to call themselves? A letter from Ray Serrano to Marika. Letters from War to Colonial Office 1941 and 1943 re- encouraging West Indians to Britain for work and ATS (Historic document). Noor Inayat Khan, by Rozina Visram (Historic figure). Editorial. ASACACHIB Activities. ICS Seminars. Forthcoming events. Book review. Recent publications. Other publications.

You can download some samples of articles published in the BASA newsletters over the last 17 years:

A poem in memory of Claudia Jones by Peter Blackman

And some of the historical figures that have been written about by BASA members:

Ira Aldridge, by Oku Ekpenyon and Jonah Albert, the ‘Negro Tragedian’ famed for playing Shakespearean roles including Othello and Hamlet in Victorian Britain.

Ukawsaw Gronniosaw, by Elizabeth Williams the slave who bought his freedom and published his autobiography ‘The Narrative of James Albert Ukawsaw Gronniosaw an African Prince’ in about 1770.