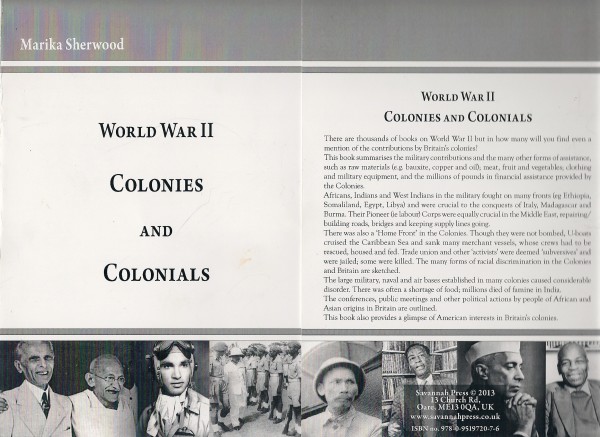 and buy a copy from here

April
You can read the latest review of the BBC History Magazine and Ray Costello’s Black Salt: Seafarers of African Descent on British Ships by clicking here. There are also reviews of The Motherland Calls by Stephen Bourne, Black Skin, Blue Books. African Americans and Wales 1845-1945 by Daniel Williams and Chris Foy’s article on black sailors which you can read by clicking here You can also read a review of Immigrants and Minorities vol.30 here

March
You can read the latest review of the BBC History Magazine by clicking here .

Newsletter 57. Following a change in Editor and the adoption of a new design and print format the July issue of the Newsletter (57) was delayed. It is now available. Click here for cover and here for contents pages.

BASA Stall. BASA had a stall at the British Library event on Monday 25 October examining the Uprisings of the 1980s. BASA member Sean Creighton was a member of the panel because of his experience in Lambeth working for Solon Housing Association (1976-82) and the Community/Police Consultative Group for Lambeth and Panel of Lay Visitors to Lambeth Police Stations (1984-9).

New BASA Chair and Secretary. The new Chair is George Wately and the new Secretary is Jonah Albert. Audrey Edwards remains as Treasurer and Marika Sherwood as Vice-Chair.

New Newsletter Editor. Kathy Chater has taken on the job of editing the Newsletter.

Ayuba Sulieman portrait – NPG. The Management Committee has made a donation of £100 to the National Portrait Gallery campaign to purchase the painting.

Oku Ekpenyon.OBE. Oku Ekpenyon was awarded an OBE in the June birthday honours. BASA was involved in nominating her last year.

Black Cultural Archives. Congratulations to BASA member Black Cultural Archives on receiving capital funding from the Heritage Lottery Fund to turn Raleigh Hall in Brixton’s Windrush Square into its new permanent home. It received cross-party backing for a funding contribution by Lambeth Council in the weeks leading up to the General Election.

Stephen Bourne. There was been much debate in BASA over the last two years about the problems of getting media coverage for members published work.BASA member Stephen has been doing well with his new book Mother Country Britain’s Black Community on the Home Front 1939-45 (The History Press). Mother Country unearths a ‘hidden history’ of Britain and the Second World War highlighting the contribution to the British war effort made by many Black Britons. These include Dr Harold Moody, Learie Constantine, Una Marson, E. I. Ekpenyon, Ivor Cummings, Esther Bruce, Pastor Daniels Ekarte (Liverpool), William “Bill” Miller (Plymouth), Len Johnson (Manchester), Charles Minto (North Shields), Adelaide Hall, Ken ‘Snakehips’ Johnson, Basil Rodgers (a Black conscientious objector from Devon). evacuees, Black senior citizens who have been interviewed by Stephen about their memories of the home front in West Africa and the Caribbean, and many others. For more information about Mother Country go to thehistorypress.co.uk

Samuel Coleridge-Taylor Network. For background see December (2009) News below. The third issue of the Newsletter is now available from BASA member Sean Creighton on onan.eifgghton@btitrnet.com

Newsletter 56. The March 2010 Newsletter is now available. It contains the following items:

Dr Carl Hylton. Positive African Self-Identity and the 2007 Bi-centenary Year. A thoughtful explanation and analysis of the work carried out in Leeds.

Howard Falksohn. Ed Francis, His Master’s Poisoner. This discusses the case of the alleged attempted poisoning of Thomas Dymock, the Keeper of the Lions at the Tower of London, by his black slave Edward Francis in 1692.

If you are not a member of BASA and want a copy of the Newsletter please email Sean You will then be sent a copy with invoice for £3, plus postage.

The Role of Community Heritage. Cliff Pereira (BASA Chair) was one of the speakers at the ‘From the Margins to the Core’ event held on 26 March. The text of his comments can be seen here.

London Mayor’s Diversity Task Force. BASA’s assessment of the final work of the Task Force can be read here.

Andrew Marr’s The Making of Modern Britain. BASA wrote to the Chair of the BBC Trust and the BBC Director General to express concern about the absence of adequate reflection of the contribution of Black and Asian people in Britain in Andrew Marr’s TV series. Replies have been received from both. The need for programme makes to be aware of the need for adequate representation in programmes accepted and the letter to the Director General has been copied to programme makers. The correspondence can be read here.

Book Review Editor. Kathy Chater has taken over the job of BASA Newsletter Book Review Editor from Marika Sherwood. If you want to have book reviewed or wish to submit a review or offer yourself as a reviewer please contact Kathy ugfhmtories@livgfe.co.uk

Freedom of Information: What’s in it for Researchers? BASA member Peter Freshwater attended a workshop organised at The Lighthouse, Glasgow on 14 September 2009 by the Research Information Network. His report to BASA Committee can be read here

To ensure you know what is going on why not join BASA?

Blue Plaques. English Heritage’s reply to BASA’s letter on issues relating to Blue Plaques can be seen here. This includes the list of plaques honouring Black and Asian individuals and those under consideration. English Heritage has told BASA that blue plaques are now only London based. The BASA Committee recommends that BASA members put pressure on local Councils to address this issue. Several local authorities and other organisations have their own schemes. English Heritage is holding a two day conference Celebrating People and Place on 18-19 February. Further details from conference@sam-culture.com or go to www.english-heritage.org.uk/plaquesconference.

The Meaning of ‘Asian’. The BASA Committee has clarified that its coverage of the Asian disaporas in Britain are not restricted to the peoples of South Asian or East Africa, but the whole of Asia.

National Archives. National Archives reply to BASA’s letter of concern over its cutbacks and the possible implications for cataloguing and work on Black and Asian history can be seen here.

William Cuffay. The text of Sean Creighton talk as BASA Secretary at the Feargus O’Connor Commemoration at Kensal Green Cemetery on 31 October can be read here.

Samuel Coleridge-Taylor Network. 2012 sees the 100th Anniversary of the death of Samuel Coleridge-Taylor, Britain’s Black composer, most famous for his work Hiawatha. Sean Creighton has initiated the Samuel Coleridge-Taylor Network for people involved in researching his life, playing his music, organising events, commemorating his achievements, and wanting to see a major commemoration of his life on the 100th Anniversary of his death in 2012. It will share information, encourage partnership working between different people involved, and encourage the development of events and media coverage across the country in 2012. It has the support of Jeff Green. If you wish to join email Sean

The Blue Plaque Scheme
We have learned from English Heritage that it only deals with London regarding Blue Plaques. However, many local authorities also put up plaques on buildings where famous (or those who ought to be famous) local people lived. May we therefore suggest that you contact your local authority to ascertain if they have such a scheme, and then send them suggested names, the reason they ought to be commemorated/recognised, and the addresses at which they lived. As there is usually a very formal unveiling of such plaques, attended by the local papers, this can be a good way of publicising the long history of the presence of peoples of African and Indian origins/descent in your locality.For example, Manchester City Council run a scheme putting up different coloured plaques for individuals, events, and buildings which are of historic or cultural significance. For instance, they have a Red Plaque on the building which stands where the 1945 Manchester Pan-African Congress was held in October of that year. More details of the scheme, including lists of those commemorated, can be found at Manchester Council Commemorative Plaques

National Archives Cuts. Following BASA being alerted by Ruth Paley’s BASAJISC posting to the National Archives planned cuts, the Committee considered the issues and a detailed report from Ruth who attended a meeting on the cuts organised by the Institute of Historical Research and the Royal Historical Society. A letter has been sent to National Archives expressing a number of concerns and hoping that they will not adversely affect continued work to make more visible Black and Asian history, and stressing the importance of continuing to undertake detailed cataloguing. The letter can be seen by clicking here.

Schools History Project. BASA has reopened dialogue with the Schools History Project, with a meeting between Dan Lyndon, Martin Spafford and Michael Riley, Director of the SHP.The meeting was very productive and discussions were held about the potential contributions that BASA can make to the 2011 SHP Conference, as well as ways in which BASA can support SHP in working with teacher training agencies to increase the awareness and understanding of teaching Black and Asian British History in schools.

Blue Plaques. BASA has written to English Heritage to re-start dialogue on the progress being made with blue plaques to commemorate significant Black and Asian residents and activists. Museums Association Conference Market Place. BASA had a stall at the Museums Association Conference Market Place on 7 October. Fabian Tompsett, Arthur Torrington, Philip Morgan and Sean Creighton were able to talk to a lot of people, and get up to date with some very interesting developments, especially among those Museums that have seen 2007 as something that needs to be continued in various way,s including greater involvement with the histories of the diverse communities in their areas. It is hoped that this will lead to fruitful dialogue, and help the work of the Museums, Libraries &Archives; Working Party convened by Fabian. A detailed report will be given to the BASA Committee on 16 November.

Uncle Tom, The Chinese laundry man, and ‘Justice’ in England & Wales, 1888-1905. The text of Jeffrey Green’s talk on 16 September at the Black & Asian History Seminar series organised by Marika Sherwood at the Institute of Commonwealth Studies can be read here.

The Old Bailey Reports – oldbaileyonline.org. As a follow-up to his Uncle Tom etc talk Jeffrey Green put together a note about what he has found in the Old Bailey reports on line. It can be read here.

RESOURCES
From time to time BASA will put original resource material from members collections on the website.

India and the Second World War

In 1943 the India League published a series of notes for speakers and students on India. 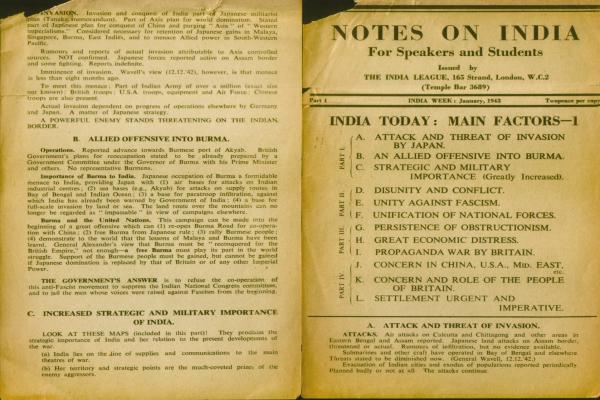 On 14 March 1945 the League of Coloured Peoples held its Annual General Meeting in London. The agenda included the minutes of the 1944 AGM. 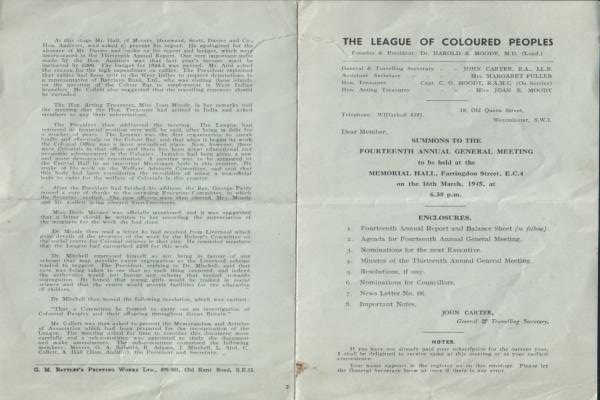 Marika Sherwood’s new book revealing the extent to which Britain benefitted from the slave trade after its abolition in 1807. You can download the flyer here